I meant to update this site yesterday, but it's now past midnight, so I guess I should put the correct date, which is the eleventh. My birthday is in fourteen days, and to be honest I'm not really having any kind of feelings one way or the the other. I guess I'm a little sad? I'm getting old and I haven't really achieved anything in my life. I have very few friends, and the friends I do have are online ones, so I don't really have anyone to hang out with in real life. While I appreciate my online friends greatly, I'm missing that physical connection you get with real life friends.

But that's enough moping. In my last entry I talked about making a persona and I shared some work in progress designs I had created. I'm proud to say, I finished a design and I'm pretty happy with it!

I know it's hard to read, but it's really not that important anyways. When I upload this picture to other sites, it'll be readable.

I reused the name of my Toontown persona, because I really connect to that name. It's not a very dinosaur-esque name, nor a very furry-esque name, but it's kind of what I'd like to be called so I think it's fine.

I'm very pleased with how this design turned out. I think they'll be fun to draw in the future. I look forward to trying to paint them, too. I want to learn how to digitally paint instead of resorting to my simple style. I don't know if I want to do realistic rendering, but I want something more painterly and interesting to look at.

I haven't had much practice painting yet, even though I've certainly had the time to practice... I'm just kind of lazy, and learning to do something new is difficult. Even though I want to see results quickly, I'm still procrastinating on actually learning, which I suppose is my downfall. I guess you could say I'm procrastinating on practicing right now by typing this, haha.


I've messed up my sleep schedule by staying up too late and taking naps. Staying up until the sun rises is all good and fun until you finally fall asleep and wake up in the evening.

One thing I've really fallen off of is using my bullet journal. I haven't really written a proper entry in it in a few months, and I haven't kept up with my mood or habit trackers. I feel a little guilty, but to be honest if I don't really feel like using it I shouldn't force myself to, I suppose. It isn't something I'm obligated to anyone to keep up with.

I started a bullet journal to try to remember more things and to collect my thoughts, since I'm kind of all over the place and I struggle to remember things as the days go by. Although, I'm finding typing things on this blog is keeping me kind of accountable rather than just in a journal. One of my goals I actually wrote in my bullet journal was not to feel guilty if I decided it wasn't really for me, because I've tried to use bullet journaling in the past and never got as far as I am now in my current one, but I still feel quite guilty. I'm proud that I made it this far- I started in February and stopped using it consistently in September.

A lot of people, mostly influencers, seem to use their bullet journal as a creative outlet. You'd think because I'm an artist I would, too. But I'm lazy and don't really care about that sort of thing, so my bullet journal is quite plain and bare. It's colorful, but not really artistic. I decided to make it easy to set up because I figured that if I made it too complicated I wouldn't be as willing to keep up with it. I think it worked, as setting it up for a new month only takes a few minutes and that's all I really need to do.

Minecraft is my favorite game, I've probably put like a million hours into it over the past ten years. I used to play on a Towny server called ImDeity Kingdoms, and I played it so much that I ended up becoming a moderator. I even played with my dad, who became an administrator! It was really fun. I even ended up going to Minecon 2013, and meeting the owner of the server along with a few other staff members. That was one of the best times of my life. It sounds kind of lame when I say it out loud that a convention for Minecraft was one of my favorite things I've ever been to, but that's just how uneventful my life is. 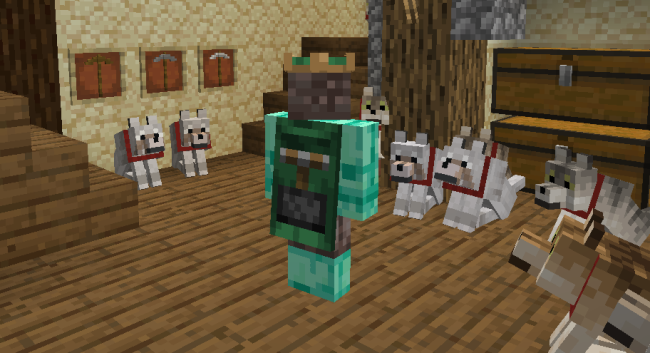 My Minecon 2013 cape! Also my old skin, I plan on making a new skin to fit my new persona. Also the inside of my house in my current world.


Currently, I'm thinking about attempting to paint my new fursona. Probably just a profile or a bust, because I'm not too experienced with painting and I'd like to make a new avatar for my social medias. I hope you had a great weekend, and that you have a great week!