I kind of fell off of working on this website, but here I am now! I've been thinking a lot more about really putting my nose to the grindstone when it comes to my artwork and trying to grow an audience. I feel that art is one of the few skills I have, moreso than my weak web development skills.

I did say I was indecisive last post, and I guess this kind of helps to prove that... I don't know if it'd be any easier to try to get a job as a web developer (or just freelance) but I already have some skill as an artist and a small following so I feel like freelancing as an artist would be a little easier. I did apply to a job as an illustrator yesterday and I'm hoping to hear back from them, but I'm a little unsure if they'll want to work with me because I'm a digital artist and it looked like the current artists they worked with were all traditional artists. Maybe I could add something a little different to their artist lineup? I don't know, I just hope it goes well!


In the meantime, I've been trying to work on making a fursona (scalesona? feathersona? dinosona? idk) to kind of represent me. I've never really had a persona besides one I made when I was in the Toontown fandom, and while I made him "basically me" I never really used him for anything.

My cogsona, Casey. Standing in a white void, kind of pissed about it apparently.

Him holding up some pride flags, from top to bottom: demisexual, nonbinary, and aromantic.


My new persona is more suited for the furry community, though I don't really know if I truly identify as a furry. I guess technically I'm a furry since I like sentient and anthropomorphic animals, but I've never really had too much interest in joining the fandom until recently. I don't know if I'd ever buy a fursuit, and you probably wouldn't catch me dead at a furry convention. Though I suppose you could say "never say never!" haha. Maybe if I made local furry friends we could go to a convention together, but I don't really see that happening in the foreseeable future.

I've had a lot of trouble designing my persona, I've redrawn the base at least four times now trying to get the proportions right, but I think my last attempt I may have gotten it where I want it. I also think I got their base colors down, in one of my attempts where I tried out painting instead of my normal drawing style. In retrospect, I need to practice painting more before I try painting something that hasn't even been designed.

My current attempt at drawing my persona, this time I'm just going to use my normal style to finish them up. Just to get a basic idea of what they look like. 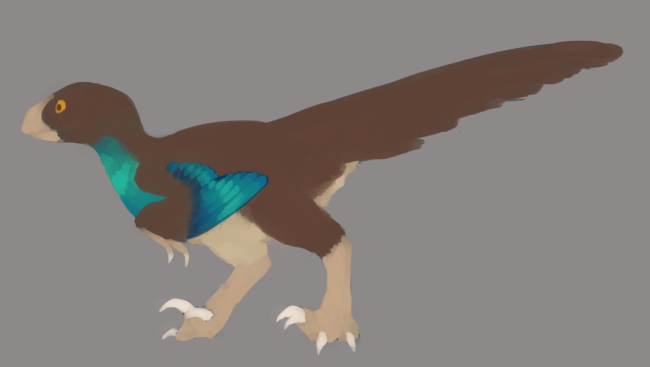 This is the coloring I'm most satisfied with so har, I want to make her a bit simple to color if I'm going to be drawing them a lot or even throwing them at other artists to draw.

I want them to be brown and blue because I definitely wanted to include blue because it's one of my favorite colors, and I felt that brown is a nice neutral color that goes well with a nice rich blue. I didn't really want to make too colorful of a dinosaur, not because I don't like colors, but because I felt I wanted a more "natural" feeling. I love fursonas with nice combinations of colors, or even just monochrome ones. I like most fursonas, to be honest! So I wanted to make sure that I'll like mine, at least for the time being. I have a friend who has redesigned his fursona multiple times and I've always liked how they turned out, and it kind of tells me that it's okay to redesign your persona if you're unhappy with them.

As for my persona's species, I decided that it might be cool to make them a Balaur bondoc! Or at least some kind of small dinosaur inspired by them. I like their dual sickle claws, and their small size suits me. I originally considered making my persona a realistically-sized Velociraptor, or maybe even a larger raptor like a Utahraptor or a Dakotaraptor, but I remembered Balaurs and how cool they are. I know that they're not really raptors like the other ones I listed, and it's even in debate if it was closer to a bird and maybe even a herbivore, but I still think they're cool. I know people who have Jurassic Park inspired Velociraptor characters, so I don't really think it matters much if my persona isn't "scientifically accurate."


It's raining right now and I'm listening to a guy talk about and play Minecraft and it's also nearly 3:30am so it's also very quiet, all while writing this. It's very peaceful, dreamlike almost. I'm going to get back to working on my persona's design, I hope you have a lovely weekend!